It’s the time of the season for interviews, and they should be trickling in fairly steady now. In the meantime, keep up the submissions, people: at this rate Issue 8’s going to be double sized.

Our first interview is with Rhiannon Thorne, who gave us two poems for Issue 7: “We Clutched Each Other Giddily” and “Small Hands.” As you can tell from her picture, she likes beer. 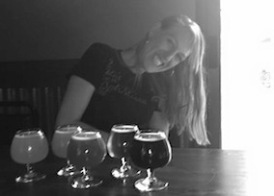 Describe your work in 25 words or less.

Tell me about your poems “We Clutched Each Other Giddily” and “Small Hands.”

Long story short, Kate Hammerich and I met on the internet, then later in person. “We Clutched Each Other Giddily” chronicles our first in-person meet-up, when I was the shy hobbyist and she the published poet, whereas “Small Hands” comes much later, during her first great illness, when I flew to IL to spend a weekend singing her Shakira. These are both happier moments plucked from a rocky couple of years of cancer, incarceration, the distance of state lines, and a slew of other curve-balls.

What or who inspires you to write?

The usual suspects: love, loss, current events, the work of other poets, or you know, the glory. I go through periods of time where I write several poems a day and my inspirations are more arbitrary, and then other times where I write one poem every few months and it’s because of some momentous life event – but rarely do I sit down to write something specific and I certainly can’t pull inspiration out of a random prompt.

What authors have influenced you as a writer?
It’s an extensive list, but off the top of my head: da levy, Maxine Kumin, Anne Sexton, Ted Hughes, and Pablo Neruda. I’m also really influenced by specific publishers, and the feel of the manuscripts they publish, such as: flipped eye publishing, CavanKerry, Toadlilly, Words Dance, Blue Begonia, and Milkweed Editions.

Do you have a blog/website?

rhiannonthorne.com is where you’ll find a list of my publications and the occasional blog, but mostly I use it to track what I’ve been reading. I’m more reachable by email: rhiannon_thorne@live.com.

Where can we read you next?

Existere and Grasslimb should both be coming out soon – Existere is publishing a poem inspired by Anne Sexton, and Grasslimb, one inspired by Ted Hughes. I’ve had other poems appear recently at Up The Staircase, Melancholy Hyperbole, Words Dance, and Foundling Review if you want to find my poems on the net.

What are you working on right now?

I went through a huge writing spurt last year, but so far this year have only written one poem. Mostly, I’ve been editing, a lot. I’ve also been putting more time into the publication (cahoodaloodaling) Kate and I started in 2012, which has been really gratifying. I’m also working on reading through a huge stack of books on my shelf, because I completely agree with what Dan Sicoli said last round of interviews, “for every word you write, read a thousand more.”

Any advice for other writers?

The struggle to come up with a theme for the contest every issue is nearly as prolific as the quarterly search for cover art, but hey, I’m only a day late this time around!

For Issue 8, the theme for the contest is the first time. It’s a pretty loose theme — first job, first house, first kiss, first break-up, and of course, the sex.

Rules: Just make sure it relates, at least to you, to the idea of the first time for someone or something. Plus, do everything that the usual submission guidelines say. Everything submitted until July 1 that follows these guidelines will be considered for the contest. And of course, even if it’s not the winner, we’ll still consider it for publication as usual.